Chaka Khan is one of the world’s most gifted and celebrated music icons. A singer, songwriter, actor, author, philanthropist, entrepreneur and activist, Chaka has influenced generations of music creators during her four decades as an artist. A ten-time GRAMMY®​ Award winner, she has the rare ability to sing in a number of musical genres, including R&B, pop, rock, gospel, country, world music and classical. She is revered by millions of fans as well as her peers for her timeless, unmatched vocal style and image. The late, great Miles Davis noted that Chaka “sings like my horn.” And none other than the Queen of Soul, Aretha Franklin, has said that Chaka “is a one-of-a-kind, premier vocalist.”

During her legendary career, Chaka has released 22 albums and racked up ten Number One songs on the Billboard charts, seven RIAA-certified gold singles and ten RIA-certified gold and platinum albums. Chaka’s recordings have resulted in more than 2,000 catalog song placements.

“I am so humbled by the love, support and gracious spirit of my fans worldwide and the continuous support my peers have shown over the years,” says Chaka. “Throughout my career, I have been through the fire a few times over and I’m still here as a living testament to God’s love and grace.”

Still at the height of her astounding vocal powers, Chaka Khan is creating new projects and earning new honors. Her latest single “Like Sugar” has earned high marks from tastemakers; the track is from her brand-new album-length project ​Hello Happiness​, due in the first quarter of 2019. In addition, Chaka is making history once again, as she has been named Grand Marshal of the 2019 Tournament of Roses Parade, making her not only the first African American Grand Marshal in the traditional New Year’s Day celebration’s 130-year history, but the first Grand Marshal to perform during the parade.

A native of Chicago, Illinois, Chaka began singing in local groups as a teen before being invited to join the group Rufus. Her fiery vocals on the group’s debut album caught the attention of music icon Stevie Wonder, who penned her first smash hit with Rufus, “Tell Me Something Good” The single from the group’s 1974 platinum-selling album, ​Rags to Rufus​, earned Chaka her first GRAMMY®​ Award. With Chaka as the group’s dynamic lead singer, Rufus was soon selling out shows across the country and dominating the airwaves with such hits as “You Got the Love” “Once You Get Started,” “Sweet Thing,” “Everlasting Love,” “Do You Love What You Feel?” and “Ain’t Nobody,” which earned a second GRAMMY®​ Award for the group. Together, Rufus and Chaka Khan racked up five RIAA-certified gold and platinum albums.

In 1978, Chaka blazed onto the music scene as a solo artist with the release of the smash hit “I’m Every Woman,” written by Ashford & Simpson. This enduring and iconic hit has been re-recorded numerous times, inspired by Chaka’s incredible original performance. Continuing her work with the late mega-producer Arif Mardin (Aretha Franklin, Bette Midler), her catalog grew with such hits as “Clouds,” “Papillon,” and “What ‘Cha Gonna Do For Me?” It was during this time that Chaka began pursuing her love of jazz. She and Mardin brilliantly re-worked the classic “Night in Tunisia” with the song’s originator, Dizzy Gillespie, on trumpet. Chaka also recorded an album of jazz standards titled ​Echoes of an Era​, which featured jazz luminaries Chick Corea, Stanley Clarke, and Lenny White. Her crowning achievement in jazz was the GRAMMY®​ Award-winning tune “Be Bop Medley” from the 1983 album ​Chaka Khan​, which also won a GRAMMY®​ ​for Best Female R&B Vocal Performance.

In 1984 Chaka Khan was catapulted to global superstardom with the release of her smash hit “I Feel For You.” Originally written and first performed by Prince, this chart-topping, GRAMMY®​ -winning recording also made history as the first R&B song to feature a rap, which was performed by Grandmaster Melle Mel. Chaka also topped the charts with “This Is My Night” and the instant classic “Through The Fire.”

Chaka’s vocal intensity, soulfulness, and ability to work within different genres made artists in pop and rock take notice. Chaka lent her voice and

production skills to two of the biggest hits of 1986, Steve Winwood’s “Higher Love” and Robert Palmer’s “Addicted to Love.” Both eventually earned GRAMMY®​ Awards. She has since worked with a who’s who of artists, including Miles Davis, Quincy Jones, Dizzy Gillespie, Stevie Wonder, Prince, Steve Winwood, Mary J. Blige, George Benson, Larry Graham, the London Symphony Orchestra and countless others, earning awards and accolades along the way. Her 2007 album project F​ unk This!​, featuring collaborations with former bandmate Tony Maiden, Michael McDonald, and Mary J. Blige, earned two GRAMMY®​ Awards for “Disrespectful” with Mary J. Blige and the album as a whole.

Chaka Khan has received a steady stream of accolades for both her artistry and philanthropy. Her awards include the Soul Train Legend Award (2009), the BET Lifetime Achievement Award (2006), the GRAMMY®​ Honors Award from the NARAS Chicago Chapter (2006) and the World Music Award Lifetime Achievement Award (2003). Previously nominated for the Rock & Roll Hall of Fame four times – twice as a solo artist and twice with Rufus – she has been nominated again as a 2019 inductee candidate.

In 2011, Chaka received a star on the Hollywood Walk of Fame and was honored with the United Negro College Fund’s An Evening of Stars Tribute with performances by Stevie Wonder, Fantasia, Ledisi, El Debarge, Faith Evans, Angie Stone, Ginuwine, Chaka’s brother Mark Stevens, and her daughter, Indira Khan, among others. In June 2012, she was inducted into the Hollywood Bowl Hall of Fame, alongside such music greats as Frank Sinatra, Liza Minnelli, Stevie Wonder, George Harrison, and others. In 2013, the City of Chicago honored her by designating July 28, 2013, as “Chaka Khan Day” and naming the street of her high school alma mater “Chaka Khan Way” after her.

Chaka shared her life’s recollections in the autobiography T​ hrough the Fire​, was published by Rodale Books in 2003 and is currently being adapted into a screenplay. In 2004, Chaka received an Honorary Doctorate of Music from Berklee College of Music. She has also performed in musical

theater, debuting on London’s West End in “Mama I Want to Sing” in 1995; appearing in the Las Vegas production of “Signed, Sealed Delivered” in 2002; and taking over the role of Sofia in Broadway’s adaptation of “The Color Purple” in 2008.

Despite her busy schedule, Chaka has always made time to support and uplift her community. In 1999, inspired by her autistic nephew, Chaka established the Chaka Khan Foundation to raise awareness, provide resources, and explore treatments for children with autism in underserved communities. She later expanded the mission of the foundation to focus on women and children at risk. In July 2012, Chaka received the McDonald’s Corporation’s 365Black Award for her leadership of the Chaka Khan Foundation. The organization raised $1.4 million for autism awareness and research and, on behalf of the autism community, Chaka lobbied on Capitol Hill meeting with the Black and Hispanic Caucuses’ to reauthor the Combating Autism Act of 2006. As a result, the act was renewed and is slated to provide more than $3 billion for autism research and other services by 2019.

Chaka Khan is also an entrepreneur. In 2019 she will be gearing up to launch in collaboration with her long-term hair stylist and creative director, turned manager, George Robert Fuller, a full collection of Chaka Khan inspired wigs and hair pieces for the everyday, modern female consumer, powered by Indique Hair. Chaka’s latest body of work, H​ ello Happiness,​ a 7-track album executive produced by English production powerhouse Switch, was released on February 15th, 2019 under Diary Records/Island Records. The 10-time GRAMMY® Award-winner is looking forward to a celebration of a lifetime this year and beyond! 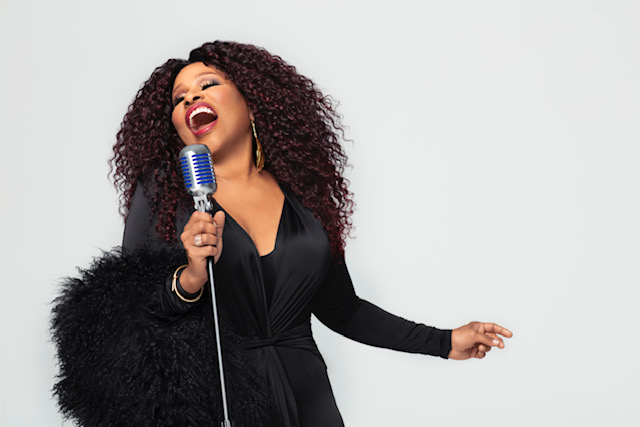